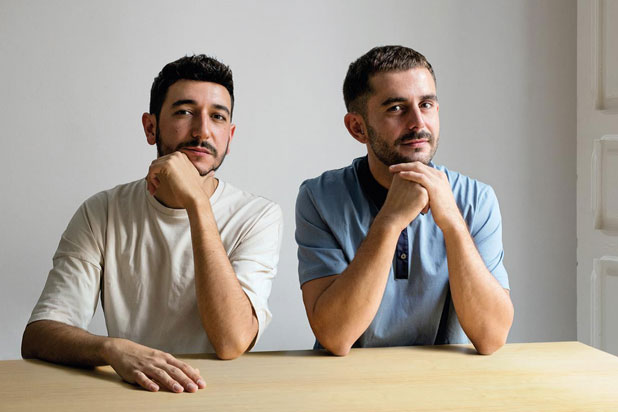 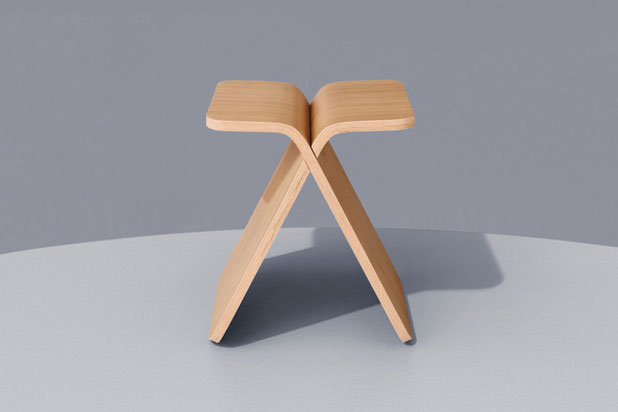 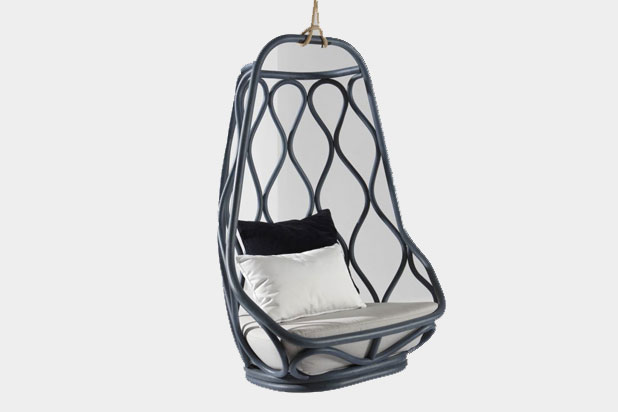 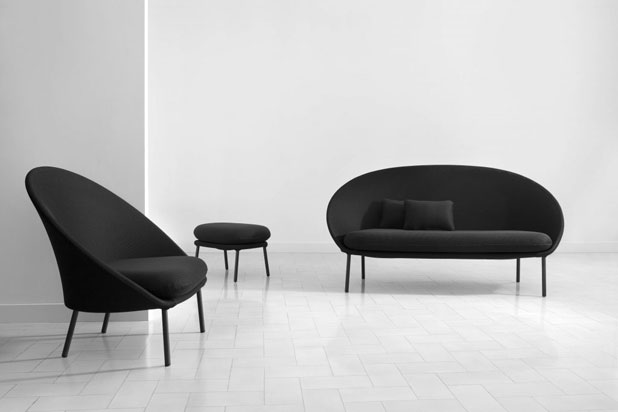 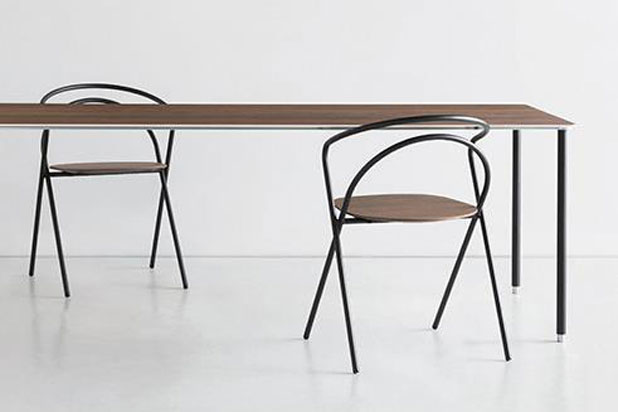 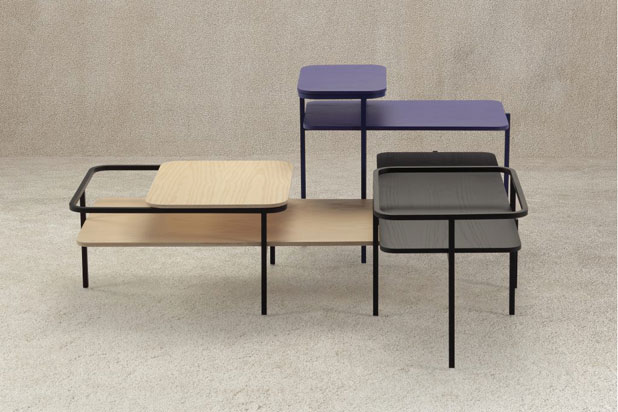 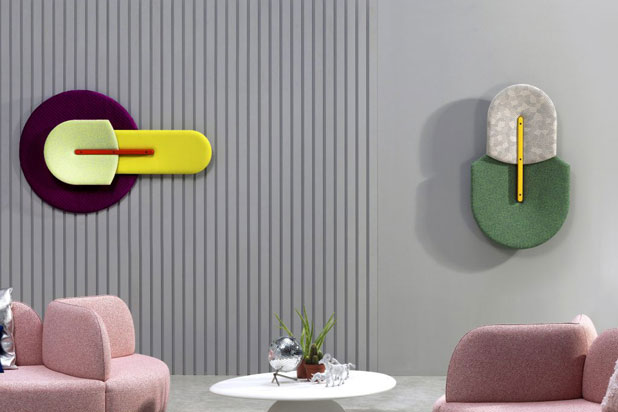 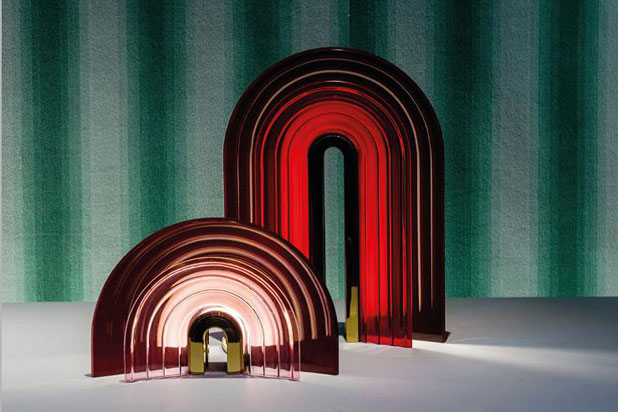 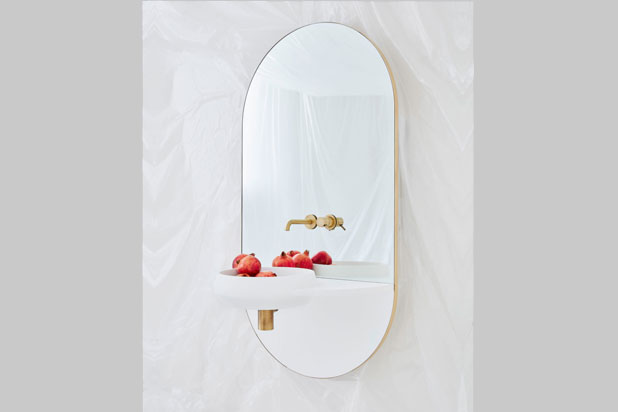 ARCO washbasin and mirror by Mut Design for Ex.t. Photo: Courtesy of Mut 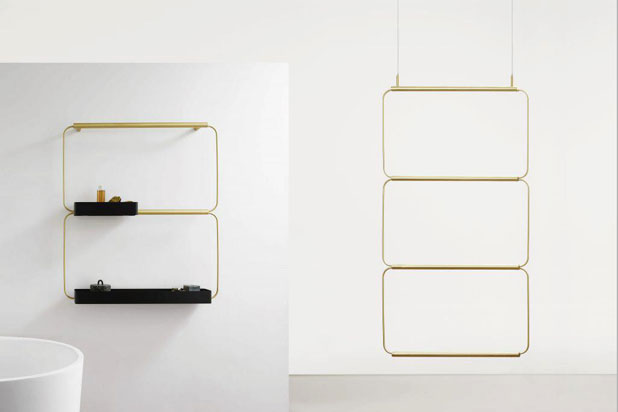 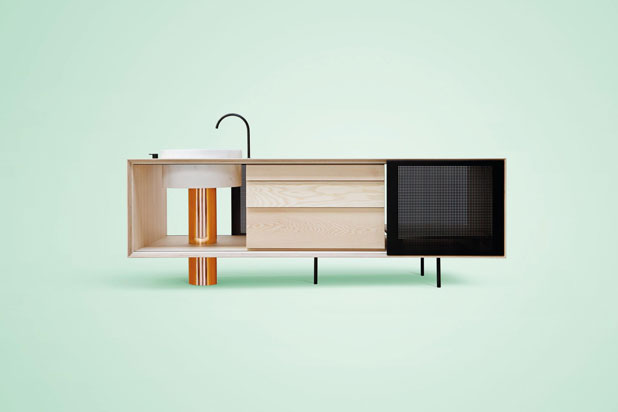 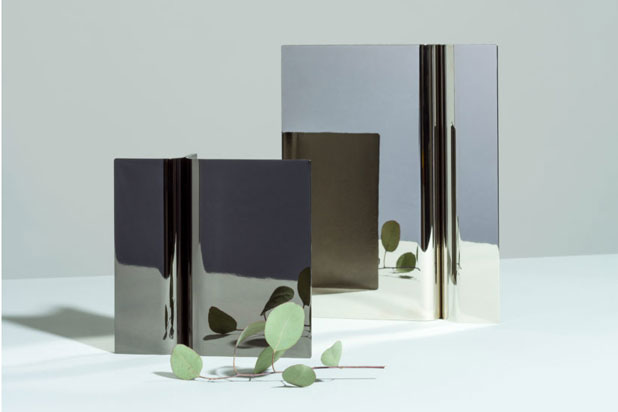 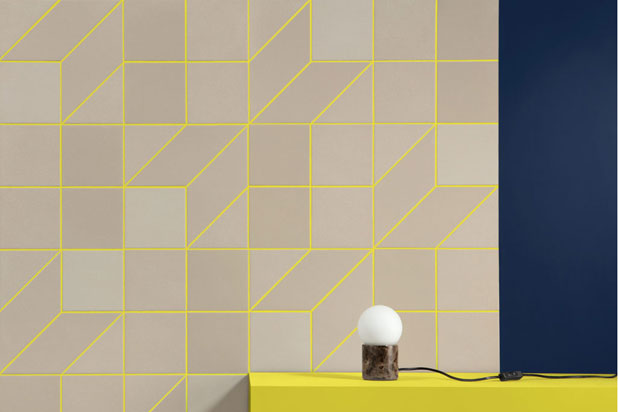 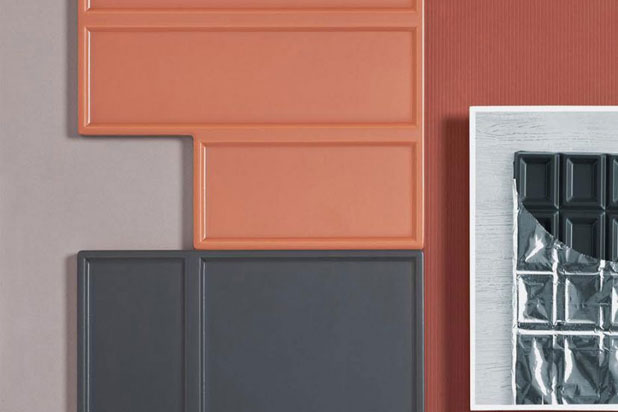 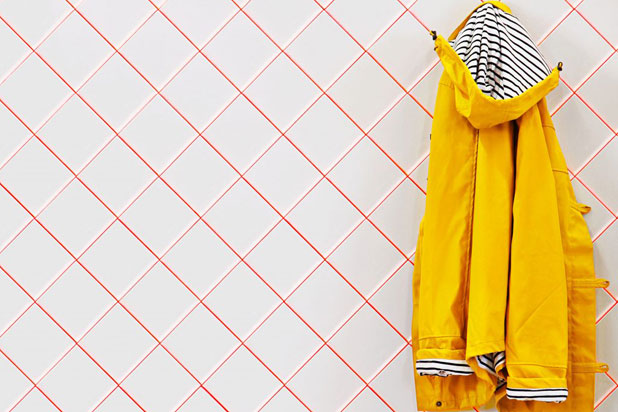 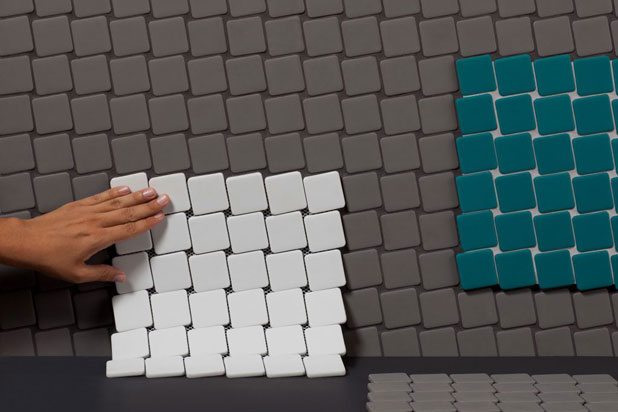 Mut is a multidisciplinary design studio founded in 2010 in Valencia by designers Alberto Sánchez and Eduardo Villalón. It bases its design conception on experimentation and the constant redefinition of objects for everyday use, a hallmark it reflects in all its projects.

The studio has designed pieces for international firms like EX.T, Expormim, Bolia, Sancal, Preciosa Lighting, Harmony of Peronda Group, and Missana. A number of its products have received prestigious global awards like the Red Dot and regularly feature in leading design and décor magazines around the world.

In this interview, Alberto and Eduardo brought us up to speed on their designs, the way they work, their iconic products and new projects.

Interiors from Spain: One of your first interviews as a studio was for our website back when you first started in 2011. How has the studio matured over that time?

Mut: Well, it may sound a cliché, but we’re older and wiser, and that wisdom has made us more independent, and given us more capacity to negotiate and decide.

As for our work, that maturity is also apparent in our diversification into different design areas, we’ve honed our organisational skills and cover a lot of more areas. There are chaotic days too, of course, but we’ve learned how to navigate the waters without having to worry about drowning. And also in the creation of products with a clearly defined personality that has led to accolades and recognition. We believe there’s been a very obvious, very positive evolution and we’re quite satisfied with how we’ve been growing over the years.

Interiors from Spain: And your design… is it still so “emotional”?

Mut: Of course. If it weren’t emotional, it probably wouldn’t exist at all. Our designs are inspired by feelings, moments, anecdotes, even our daily lives. Those big and little everyday emotions are the germ of the idea, and afterwards they are transferred to the product or final project that seeks to awaken that same feeling in the user or spectator. That’s a premise that will never change because it’s an intrinsic part of our approach to design.

Interiors from Spain: How important is it for you to use fine materials like wood or ceramics in your creations? Are there any new materials you’d like to work with?

Mut: We like working with fine materials because they convey emotions. They have a warmth that brings the objects we design to life, as it were. Stroking an object made of wood takes us back to the forest it came from. Or maybe not that far, but at least much more than something made, say, from plastic. It’s pleasant to the touch, the veins in the wood tell stories. It’s the same with ceramic. It’s as if it’s telling us about the hands of the artisan who gave it its form. We just love that capacity for expression that fine materials have.

Of course, we’re always open to new materials too, not just the traditional ones, but also the more technological kind like LivingTec®, which we’ve been able to use with Italian bathroom-maker ex.t. Or the absorbent foams developed by Sancal for its Beetle sound panels.

Interiors from Spain: Two of your designs “Nautica” and “Twins” have brought your studio worldwide recognition. Where did you get the inspiration? What’s the key to designing an iconic product?

Mut: Nautica and Twins are two products for the same brand, Expormim, which was one of the first companies we began to work with as a studio. That partnership has been like a magic bullet for both of us and we won two Red Dot Awards in a short space of time.

Nautica is a very special design. The remit was to revise an older product, a rattan swing that Expormim used to make back in the 70s, and to give it a more personal, more modern look. We drew our inspiration from light reflecting on the ocean; hence the wavy silhouette that seems to change depending on your movements or perspective. We weren’t expecting it to be so successful, though. Nautica has become a brand icon. Since 2012, it’s never failed at any trade show, in Spain or worldwide.

The Twins armchairs came later and sought to cater for a very different need. They’re an outdoor collection, made from much more technical materials and they look totally different from the swing. But the simplicity of the manufacture, their likeable lines and attractive colours have made many people fall in love with them, as well as the fact that they are so versatile that they have come indoors from outside. We imagine it’s that capacity to appeal beyond our own national or cultural boundaries, to transmit emotion in a universal language, to adapt to the most disparate settings and to move beyond fashion into timelessness that have turned them into an icon.

Interiors from Spain: There is a masculine and feminine version of Twins, why is that? Does design have a gender? Where do we see that?

Mut: Twins was always said to come in a masculine and a feminine version, but we think that over the years that’s caused a few misunderstandings. We don’t see design as having a gender, nor do we design one armchair thinking more of women and another thinking of men. What we were really trying to say is that the low chair, with its, let’s say, more fun shape, might appear more feminine, whereas the high armchair, with its raised back and more rectilinear silhouette, has a certain masculine look.

Interiors from Spain: What working method do you adopt when you approach a piece?

Mut: Our design process is basically the same whatever product we’re dealing with.

First, we study the market. That way we can detect any potential gaps and we get steeped in the trends we see taking shape in the area in question. Then there’s a brainstorm out of which we choose the best ideas and that’s when we produce our first drawings. We spend a while taking the client’s vision into account and fine-tuning those initial outlines and give them form until we’re almost sure they meet our needs and will get the client’s go-ahead with only minimal changes. Once that’s happened, we start developing prototypes, which is a phase we love to be involved in because it enables us to be part of the creative process right through to the end. Seeing how our early drawings and models become a real, tangible object is really exciting. And having the chance to visit the workshops and factories where that happens, learning the techniques, (which is very useful for when you come to tackle new designs), is something we absolutely love. With the bonus that, this time, the chair, washbasin, lamp or tile you’re going to see, has come from your own imagination and hard work; it’s your own creature.

Interiors from Spain: Any advice you would give to new Spanish designers and design studios that look to you as a role model?

Mut: We believe that, if we’ve got where we are today, it’s not just been about talent, but about effort and hard work. Having flair or a gift certainly helps, but if you don’t combine it with passion and dedication, it will serve no purpose at all. You have to put the hours in. To be very active. To make contact with companies whose outlook you are familiar with. It’s also important to take care of customer relations, listen to them, cater for their needs… That’s what builds long-term partnerships.

Interiors from Spain: How do you see design in Spain? And new talent? Do you think Spanish companies are committed to fostering newcomers?

Mut: There are a lot of little studios, like us, which bit by bit have been making a name for themselves both in Spain and on the international stage and that’s partly because Spanish companies have been making that commitment. We’d like to be optimistic and think that the scenario will gradually change for the better, that our profession will become more highly valued and that there’ll be more opportunities for Spanish designers.

Interiors from Spain: You’ve worked with Italian, Scandinavian and Japanese companies. How was that experience? How was it enriching?

To be honest, every company we work with enriches you in a different way. With Spanish companies, it’s easy to communicate. With the rest, you sometimes come up against little obstacles, owing to cultural differences, but we’ve always been able to overcome them. Every project, every way of working, every company—be it one you know or one you don’t—brings a new learning curve. At the start of the interview, we were talking about how we’ve matured over the years. Well, it’s precisely working with companies from very diverse areas and origins that has most contributed to making us grow up and improve day by day.

Interiors from Spain: How about new projects in the offing? Any of them for companies in new interior design sectors you haven’t worked in yet?

Mut: Right now, we’re immersed in a project we’re very excited about: interior design for a hotel. We’re going to be designing absolutely everything, from rooms to communal areas, decorative elements, furniture… We’ve never done anything like it before and, although it’s a lot of work, it’s really exciting. We’re also working on new products we’ll be unveiling at the next edition of Salone del Mobile in Milan, but we we’d rather not reveal the mystery just yet, because there’s still a long time to go and also because, over the years, we’ve become less impatient and more in favour of the surprise factor. Perhaps that’s another sign of maturity…