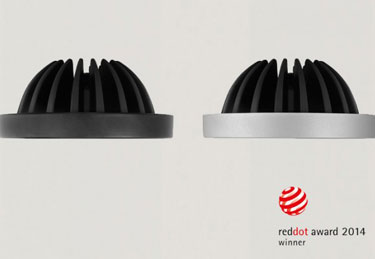 The Spanish firm scoops these prestigious prizes for its Slimgot and Lark-111 lights.

Arkoslight is in luck: two of its latest designs have received a Red Dot 2014 award. Its Lark-111 lamp and slimline Slimgot pendant light scooped these prestigious prizes awarded to excellent product design. The judges selected these products out of over 4,810 entries nominated by over 1,800 manufacturers and designers from all over the world.

Slimgot’s slimline form radically departs from lights made of traditional rectangular sections. Its geometric form which, seen from its side, resembles a pyramid with the top sliced off, optimises the amount of light it casts and determines its minimalist, compact look. Its utterly unique diffuser offers a specific optical effect comprising 3D light waves. This light demonstrates how the current switch in lighting design from fluorescent strip lights to LEDs constitutes a conceptual revolution. Lark-111, meanwhile, is the best LED light for QR-111 lighting since it only consumes 10.5W to 15W of power in contrast to conventional 60W or 100W-powered QR lights. This light’s stripped-down form allows it to be installed in 90 per cent of lights currently on the market.

To these two accolades can be added the iF Product Design award 2014 won by Slimgot itself and Arkoslight’s Zen projector, as well as an A’ Design award 2014 and a Delta award 2013, also won by Zen. This clutch of prizes positions Arkoslight among lighting manufacturers creating the most internationally renowned product designs. In its case, this is thanks to the hard work of its in-house design team, led by its head of design Rubén Saldaña.