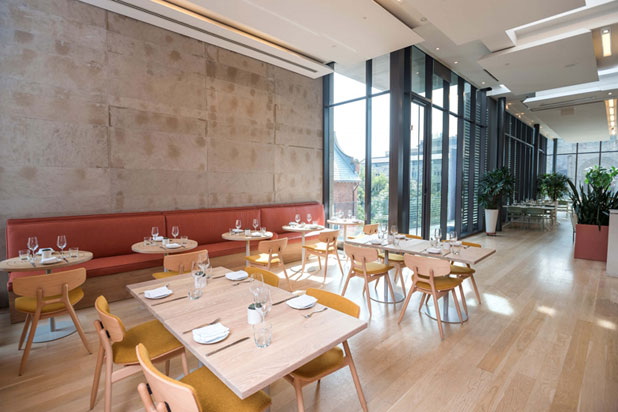 Capdell brings the warmth of Mediterranean furnishings to Canada, Russia and Estonia

Winters in Canada, Russia and Estonia don't feel quite so cold when you're enjoying a relaxed meal in a restaurant featuring furniture by the Spanish company Capdell, which reflects the warmth of...

Use the filters to find projects by Spanish companies and brands in Spain and around the world.

One of Spain’s most prestigious contemporary furniture companies marks its 60th birthday this year. To congratulate it, we want to draw attention to its most recent projects undertaken in the US — the office equipment of Bayer HealthCare in New Jersey, the new corporate HQ of law firm Goulston & Storrs in Boston, IBM’s design studio in New York and the HQ of financial advisers LPL Financial in San Diego. Andreu World supplied Bayer HealthCare’s office with Smile, a stackable chair with an upholstered seat and beech frame and backrest, Moody, a stool with an ash frame and upholstered backrest and seat, Extra, a table with an aluminium top and legs, and Closed, a table with an oak top and legs. The first three pieces were designed by Lievore Altherr Molina, and the second table was developed by the company’s in-house design team.Andreu World’s Sit chairs and benches, also by Lievore Altherr Molina, and Closed grace the renovated office of Goulston & Storrs, while its Lineal Comfort chairs with an upholstered frame and sled base, again by Lievore Altherr Molina, are found at IBM’s New York studio. Finally, LPL Financial’s HQ boasts the company’s Anna collection of chairs and stool, created by its in-house design team.Throughout its 60-year history, Andreu World hasn’t just aimed to supply spaces with furniture but to boost people’s wellbeing. It makes spaces that are less cluttered, sustainable, salutary and habitable. The secret of its success is its enthusiasm, energy, technological innovation and good design — all key hallmarks of the company that has evolved from being a small cabinetmaking workshop, founded by Francisco Andreu Marti, to a modern, competitive business that employs over 230 employees and has a commercial network in 70 countries all over the world.

In conjunction with architecture practice Ateliers Jean Nouvel, renowned Spanish firm Figueras International Seating  has co-created the chairs that grace Philharmonie de Paris, a unique architectural project in the French capital’s Parc de la Villette. A total of 2,400 chairs with exceptional acoustic qualities, designed in various versions, can be adapted for use in all parts of Paris’s new cathedral to music.The seating installed in this spectacular concert hall has been specifically designed for this venue, and is named after it. High-profile French architect Jean Nouvel was commissioned to create this unique space which is adjustable to the needs of spectators, who, seated in cascading balconies, experience the sensation of being suspended in mid-air and surrounded by music. Nouvel and the hall’s main acoustic engineer, Sir Harold Marshall of Marshall Day Acoustics, has created a setting that perfectly fuses architecture, acoustics and stage design.Figueras has worked with acoustic engineers and set designers to ensure the seating fulfilled the room’s exacting acoustic requirements. This project’s main challenge lay in creating seating with very low acoustic absorption which would allow for maximum reverberation and so compensate for the room’s vast scale. The construction of the seating needed to be revised many times, and involved up to 10 acoustic tests in laboratories in Paris and Barcelona to achieve the desired design. Another challenge was to create custom-made seating which would fit into all areas of the undulating room. The space’s 1,800 Philharmonie seats feature a synchronised backrest and seat mechanism so that, when folded up, they take up very little space. The room also has 282 similar chairs with fixed backrests, suitable for more shallow tiers. The seats are upholstered in fabrics in five shades and come in four wood tones and five widths. The wood was treated to make it as glossy as a piano. The differently coloured seating demarcates different areas in the space, according to the architect’s criteria.Nouvel conceived Philharmonie as an adjustable, versatile concert hall, which can be adapted to any kind of concert or show. This needed two types of moveable seating systems and the Figueras seats had to adapt to this requirement. The choir, behind the orchestra, has a telescopic platform for 319 people, and Figueras has placed one of its most compact, comfortable chairs in that area. The second moveable system is in the stalls in front of the orchestra and allows Figueras’s 476 chairs to be concealed under the floor. Thus equipped, the stage moves back, allowing standing room for around 1,000 people for concerts of other types of music. Finally, Figueras’s Oxymore seat, designed by Nouvel, was chosen to increase capacity, if needed — 300 chairs can be used or stowed away, depending on the occasion. Thanks to this adapatibility, the concert hall can host classical, pop, jazz and rock concerts as well as all kinds of shows.

In 2014, Ascender, which manufactures seating for big public spaces (cinemas, theatres, auditoriums and convention centres), has equipped Moscow’s prestigious International House of Music with 1,800 Petra Especial armchairs. The International House of Music’s main space has been recently renovated so that it can host more musical events. This has necessitated stalls which can be totally dismantled. Ascender not only provided this special feature — and installed its chairs in a curve, as required — but tackled the complexity of designing six widths between the axes, two backrest heights and two depths of seat. The most obvious choice for the project was Ascender’s Petra Especial armchairs, which were custom-made to meet the most exacting requirements of one of Europe’s biggest and most prestigious music institutions — ample proof of the company’s ability to provide bespoke seating for world-class concerts and operas. Ascender’s armchairs grace many public institutions all over the world. Notable, recent examples are the Institut Le Rosey, near Geneva in Switzerland, one of the country’s most prestigious and established educational institutions, the auditorium of the Szczezin Philharmonic  in Poland, the Salle Gramont at Conservatoire Jean-Baptiste Lully in France, Torre Cepsa in Madrid, designed by Norman Foster and Spain’s tallest building, the auditorium of the Muscat Civil Aviation Headquarters in Oman and two conference halls in Kuwait’s Ministry of Interior. Ascender was founded in 2003 in Ezcaray in La Rioja, Spain, and quickly positioned itself as a highly respected European company in the seating sector for cinemas, theatres, auditoriums and communal spaces. Its armchairs are of a very high quality, innovative and always manufactured in an environmentally friendly way.

Modern furniture company Stua has supplied its ever popular Nube armchairs to the new Library and Learning Centre at the Vienna University of Economics and Business. The impressive 28,000 m2 building by Zaha Hadid, which has a black cantilevered roof section, is one of seven buildings that make up a new campus catering for 24,000 students and 1800 staff. Stua's upholstered Nube tub chairs have been supplied in a range of bright two-tones colours to the cafe on the library's lower floor, along with its Marea tables with green tops.  The result is a cafe that looks full of life and character; and because these tub chairs are so comfortable and supportive, they encourage people to stay and talk... which may be or not a good thing according to the cafe's management. The Nube chair by Jesús and Jon Gasca was inspired by flat surfaces and the curves of the human body. The drop curve seat has been cut out of a solid block so you see the curve from all angles. This combined with its minimal use of materials makes it such a striking piece of furniture. Stua’s seating and tables can be found in many public spaces all over the world, including such iconic buildings as the Solomon R Guggenheim Museum in New York, the Acropolis Museum in Athens and Milwaukee Art Museum, such restaurants as those in the Whitney Museum of American Art in New York, the Dubai Mall at the top of the Burj Khalifa tower and Sydney Tower and such offices as Google’s HQ in California and those of ING Group in Amsterdam and leading advertising and PR agency Publicis in Dublin.

In 2013, contemporary furniture and seating manufacturer ENEA’s Lottus family of furniture, designed by Lievore Altherr Molina, obtained the Australian certificate GECA (Good Environmental Choice Australia). Thanks to this, the company has provided some of its furniture to Sydney’s Central Park shopping mall in 2013 and Royal Commission in 2014. The GECA certificate determines whether a product is designed and made according to fundamental eco principles. ENEA’s Lottus Wood seating collection meets these criteria, thereby allowing it to be used to furnish projects in the country. ENEA has already obtained this certificate for some of its other products, such as its Oh! and Lottus family. The Sydney’s Central Park mall is a high-rise shopping centre designed by French architect Jean Nouvel. It’s an intelligent, green building that uses renewable energy. Its plants are automatically watered at night, while its intelligent roof allows the building to be self-sufficient, thanks to the energy it gains from its sunlight-absorbing solar panels. ENEA has supplied its public areas with 500 Lottus Wood chairs with black, white or green polypropylene seats and a special lacquer finish. This year ENEA has also furnished various rooms at Sydney’s Royal Commission with its Lottus Wood 2D benches and one of the judges’ offices with its Lottus Wood 3D chairs with red, upholstered seats. Located in a modern skyscraper in Sydney’s financial centre, this institution belongs to the Commonwealth. ENEA was founded in 1984 with the aim of producing contemporary designs for all kinds of public and residential spaces. It has supplied its furniture to such projects as the Basque Culinary Center in San Sebastián, the Helsinki Seafarers’ Centre, the Putrajaya Centre in Kuala Lumpur and the Adriano Zumbo patisserie in Sydney.

Dubai’s five-star The Address Downtown has refurnished its roof garden with a range of furniture from Point, one of Spain’s leading outdoor furniture manufacturers.Guests can relax on some of Point’s classic designs, including the Bubble chairs/loungers designed by Alfonso Gallego; the Sunset double sunbed by Esther Campos; and the Weekend sofa by Juan Santos. If you need somewhere to put down your cocktail, then Diabolo tables by Gabriel Teixidó are always close at hand. For dining, the hotel chose Amberes high backed chairs by Alfonso Gallego, and Esther Campos’s Angul tables.Point was founded in 1920 and is run by the third generation of the Pons family. Its products are characterized by comfort, contemporary design, and hard-wearingness. The company uses aluminium frames and technically advanced fabrics that are waterproof and which won’t degrade in extremes of heat or cold.The Address Downtown is close to the Burj Khalifa, the world’s tallest building, and it has won many accolades, including ‘The Best Hotel in the World’ no less, as voted by readers of Global Traveler magazine.