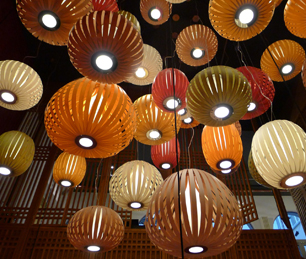 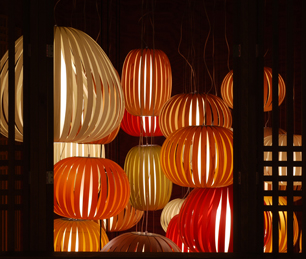 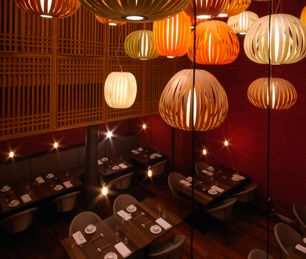 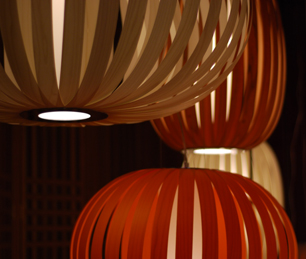 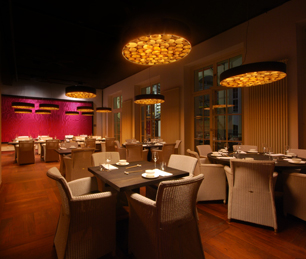 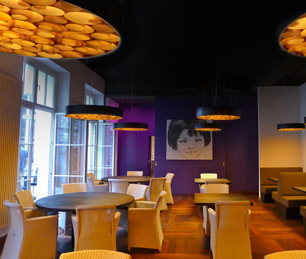 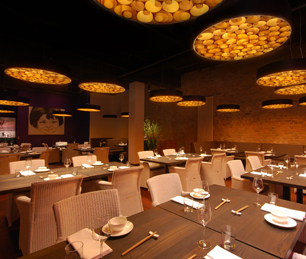 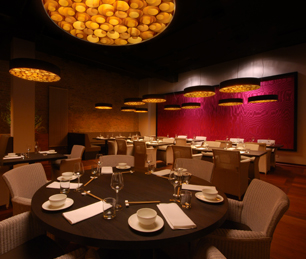 Spanish company LZF’s spectacular Poppy and Spiro lamps have been chosen to illuminate Asian restaurant Soya Cosplay, situated at the heart of Berlin.

Located a few streets away from the Brandenburg Gate, this modern, Asian restaurant welcomes both Berliners and tourists to enjoy its food in a very cool interior filled with the Spanish firm’s monumental pieces.

The restaurant’s designers considered it vital to offer customers a complete experience in which tastes, atmosphere, sounds and light mingle, so pampering all the senses and creating an unforgettable experience. That’s why the restaurant chose to illuminate and embellish its interior with these two lights made of strips of wood in evocative forms that create a magical atmosphere. Various arrangements of both designs – which provide this exclusive restaurant’s different zones with warmth and a dynamic feeling of movement – have been created.

Spiro is a circular, pendant light created by Spanish designer Remedios Simón. It takes its name from its delicate, concentric wooden elements and evocative forms through which light escapes. Its spiral formations have the potential to be ornamental and symbolic and invite you to lose yourself in them as you take in their hypnotic lines. Poppy is another pendant light with a convex shape, created by German designer Burkhard Dämmer. Both lamps have one thing in common: they’re hand-crafted using one raw material – wood.

Spanish firm LZF was founded in 1994 in Valencia by Sandro Tothill and Mariví Calvo. Since then its spectacular designs have proved a hit throughout the world. An innovative approach – which drives the firm to collaborate with young designers and use cutting-edge materials – hand-crafted manufacturing and a respect for the environment are the company’s main hallmarks.

Today, its lights grace countless public spaces all over the world. These include such hotels as the Sheraton Waikiki in Honolulu, Chicago Marriott, Hilton in Glasgow, the offices of such well-known companies as Microsoft, General Electric, ING and Hyundai as well as many restaurants and public spaces, for example, Disney Cruise Lines, Asiatic Restaurant in the United Arab Emirates and New Zealand’s Cinema Complex.