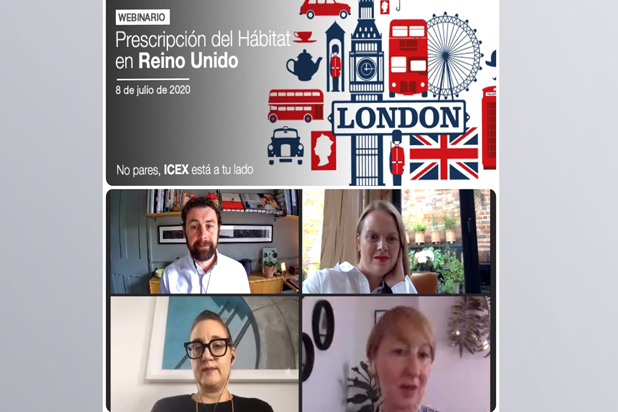 The arrival of Covid19 has been a hard blow in every way. And nobody has been spared: companies, businesses, governments, countries or people. The most immediate consequence is a generalised halt in all productive sectors, including the Hospitality sector, which combines the hotel and catering industry.

This consequence has affected London's specifiers, where some design studios with the greatest presence and influence worldwide are located. Interiors From Spain – ICEX has spoken to them at a virtual meeting on 8 July in which they have shared their concerns with us. “Many practices saw projects postponed [...] Schedules were also altered”, “some sites were shut down completely for a few weeks..." they explained.

However, living with the normality of the virus has not tarnished the positive attitude of specifiers, who are beginning to see the light at the end of the tunnel. Some, like Lewis Taylor, Design Director at David Collins Studio, explain that, despite initial difficulties, schedules have been maintained "in general" mainly because he believes that clients see that things will return to normal. “We’ve been very lucky, especially in hospitality. They’re two or three year projects, so there is a long view to them.”

But what they can't agree on is a date for a return to the much-desired normality, despite the positive sensations of the new future. Steven Saunder, founder of Fable Studio, says that “it's still too early to tell” although there should be movement in the market in September, “but not as we were”.

Others like Jo Littlefair, Director of the Goddard Littlefair studio, believes that “I don't think it would be the normal September 2020 we would have expected in January. All the outlooks on projects, brands, levels of hotel, etc. are different". She specifies more and reveals that some people in the industry "are only getting luxury developments" which means that other lower level projects are not currently being considered.

Tina Norden, partner of Conrad Partners, focuses on the “big question”, future return on investment: "There’s going to be less income, but they will also have to spend money in the shorter term to change things around again when and if we return back to complete normalcy", she says in reference to reduced use of spaces due to Covid19.

On the future, Jo Littlefair goes even further on the role of design and its relationship to the public. “Looking to the future, I feel that hospitality has a great part to play in people's lives. Wellness and mental health are a big thing for us and we’re thinking about how we can help hotels become sanctuaries almost”. Littlefair also reflects on the future of her sector and ways of working: “Hopefully people will now think more responsibly about what they're doing and how we design and what we create - not being throwaway with it, not being flippant with it”.

Daniel Gay, Managing Director of Coexistence, also spoke on this issue, stating that it is "only now that we can realistically look ahead to the future, whether that is next week, or next year". What the head of Coexistence does stress is that confinement has reminded us of "the importance of human contact, the importance of having trusted and supportive partners and loyal clients. It is clear that working the future will involve considerably more home / remote working, and that these activities can and will improve productivity, help cut overhead costs”, he said.

Problems and solutions for the future

The confinement and pandemic have also created an additional problem for design studios. Remote working has become a reality, but it does not solve all day-to-day setbacks. In that sense, all designers stress the importance of working with physical samples, especially in the first stage of creation and delivery of designs to clients.  However, current conditions have encouraged the search for alternative solutions, such as digital libraries.

Some, like Conrad+Partners, say they have been working on the digital library "for a little while now". Others, like Lewis Taylor from David Collins, say that "a digital library is a good starting point" given current circumstances, although he points out that it is in no way comparable to the face-to-face format. “No matter how good digital photography is, you don't see the colour, say, or the movement in the materials, unless you see the physical samples together”, he stresses.

The truth is that the transition to the cloud and digital world has been accelerated due to the pandemic, which has affected not only the day-to-day work of specifiers, but also the development of the business process. In fact, trade fairs have gone from being presential to digital. On this fact, Daniel Gay clarifies that he does “not think" that the physical experience can be completely replaced by the digital "if we are to design and create human centric environments".

Digital solutions include increased use of product videos or discussing projects with consultants, manufacturers and specifiers by video conference. Given the new change, some like PJ Statham, owner of Momentum, say that they are already working on "mounting exhibitions in dealers’ showrooms around the UK and inviting architects".

Another key to the new future is sustainable design. Both clients and designers are redirecting their efforts to address issues related to sustainability, such as energy consumption, project longevity, materials, circular economy, etc. Lewis Taylor highlights that "sustainability just keeps increasing in importance" and that from his studio they are carrying out a project in the Middle East that has "high regulations" on sustainability. Others like Steven Sanders say that at Fable Studio they are opting for materials "that last a long time". In short, all studios agree on the future need to address sustainability as a fundamental principle of their creations. On this subject, Daniel Gay thinks that the response "today" is much better but that "there is still a lot more to do".