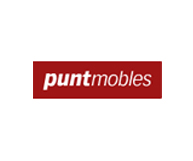 see report Puntmobles was set up in Valencia in 1980 by designers Vicent Martínez and Lola Castelló and technician Francisco Fernández, and immediately adopted an innovative approach to furniture design, both domestic and contract. Some of its pieces have become design classics, exhibited in museums such as London's Victoria & Albert and The Design Museum, the Museum für Angewandte Kunst in Cologne in Munich, and the Museo de las Artes Decorativas in Barcelona. Puntmobles has won many prizes and awards, including the Spanish National Design Prize in 1997.